I learnt to knit as a child and have continued to knit ever since then. The first item I remember making was a garter stitch rabbit with long floppy ears and at school every year, each class had to produce a garter stitch squares charity blanket and baby cloths. 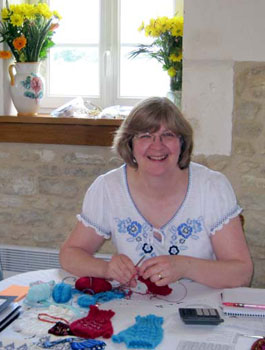 I started by knitting from commercial patterns, mainly from women’s magazines, until my mid-twenties when I started to design my own patterns. I left work to start a family and bought myself a knitting machine. Initially, I tried to teach myself and then found out about machine knitting classes which I attended for the next few years. Hand knitting took a bit of a back seat at this time as I started to design and sell children’s machine knitted garments at craft fairs and through party plan.

In 1989, we moved to Fareham so I stopped the knitting business I had been running and I had the opportunity to study the City and Guilds Creative Studies course in Machine Knitting. The course not only gave me confidence to start writing patterns but also to teach knitting, initially machine knitting but later including hand knitting.

At this time, I also started to design garments and patterns for small yarn producers e.g. small farms producing their own mohair and rare breeds sheep wool.

I continued to work for a variety of people as well as teaching both hand and machine knitting. In 2001, I had a piece of work exhibited in a major international knitting exhibition and at the private view in Farnham I met the editor of Machine Knitting News who was looking to develop a new hand knitting magazine. That magazine was Knitting and I had designs and technical articles published in the magazine from its first issue in 2003 until now.

I have also been published by The Knitter, Simply Knitting, Let’s Knit and YarnForward/Yarnwise.

As well as working on commissions for various magazines, I have also continued to produce my own designs as well as teaching. I particularly like to design garments, focusing on the details of the garment, edgings, shaping and finishing, and also developing ideas where the garment is not constructed in the conventional way.

I have a number of patterns that are all joined with knitting and may use modular techniques, bias knitting and short row knitting, as well as top down garments and patterns worked in flat pieces.

I continue to learn and explore many of the different areas of knitting to include different techniques in my patterns.

After a two year break, we are very pleased to be able to again offer our popular knitting holiday in France. The holiday is a relaxing week of workshops……

» Full details and how to book

You can find out more about which cookies we are using or switch them off in settings.

This website uses cookies so that we can provide you with the best user experience possible. Cookie information is stored in your browser and performs functions such as recognising you when you return to our website and helping us  to understand which sections of the website you find most interesting and useful.

You can adjust all of your cookie settings by navigating the tabs on the left hand side.

Strictly Necessary Cookie should be enabled at all times so that we can save your preferences for cookie settings.

If you disable this cookie, we will not be able to save your preferences. This means that every time you visit this website you will need to enable or disable cookies again.